You simply sit down at the typewriter, open your veins, and bleed.”—  Sports writer Red Smith 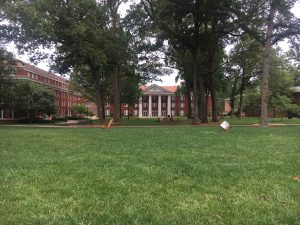 Queens University, Charlotte, NC
A few blocks from where my great aunt and namesake lived

The only people who think writing is easy are those who have never tried it. And people who think all writers are rich mustn’t know any writers. So why do people do it? Because they have no choice.

I’ve run toward it only to run away from it and then back again. In my 40s, I fully embraced it, and I’ve lived to tell the tale.

I’ve written everything from public service announcements to trade magazine articles, from poetry to novels. Writing is never going to be easy, but here’s how to make it easier:

1.       If it won’t flow, free write. Butt in Chair, and WRITE! If it’s not coming, doodle. If the doodles make no sense, close your eyes and see where you go. Come on, now, you have at least the germ of an idea, or you wouldn’t be blocked. Let the story take you, like a genie in a lamp or a magic carpet ride, or if you’d rather stay Stateside, a Disney ride.  Write, and write, and write. I didn’t say, Think. I said Write. Your subconscious knows how to write the first draft. Let it. You can then revise, and revise, and revise. Only in that order. It won’t be perfect the first time. That’s ok. That’s what the delete button is for. I know it intimately. But I save it for Round Two and revision.

2.       If it won’t gel, plot. Number 2 has always been my biggest stumbling block. Critiquers used to compliment me on my fully developed characters, original story idea, and pithy dialogue. Yet my stories were more character- than plot-driven.  Now, I’ve developed a technique, drawn from a myriad of other techniques, and years of suffering, to plot.  Look at fairy tales; you’ll see that most use this formula: When I began to think of all writing as a journey, I began to plot with precision.

a.       Start with a character, usually in transition, who wants something. (Old World/Motivation)

b.      Have their world change. (Inciting Incident)

c.       Have them meet someone or make a mistake that blocks their progress. (New World/Conflict)

d.      Have them face their fear, usually after a couple more forks in the road. Don’t worry about the forks; as the adage reminds us, “All roads lead to Rome.” (Climax)

f.        Have them take their blinders or rose-colored glasses off and realize what just happened. Have them acknowledge the gifts of their journey and their transformation.  (Coming Full Circle/Denouement)

You can repeat c and d a couple of times, if you’d like. These days, novels need to be short and simple, so conflict is rarely complex. My novels do have multiple conflicts, though, and yours can, too. It’s your journey, your world! This method can work with non-fiction as well, if it’s character-driven. I happen to believe all the best writing is populated.

“The creative process is one of surrender, not control.”–– Julia Cameron

3.       If it’s not true, research it. If it’s not clear, they won’t read it. If it’s not based on reality, even if it’s science fiction, they won’t believe it. Either way, they’ll stop reading. Research can add vivid details, clarity, and believability to your writing. Most importantly, it will add truth to it, even if you’re not telling the truth. And truth is more important than “the” truth.

4.       If it’s in your head, write it down. Or record it.  If you don’t, you’ll forget it. I’ve been known to scribble on napkins, my bare hand, and my children. I’ve come up with ideas in the strangest places and doing unmentionable things.  Your most spontaneous ideas can become the first graph of a best seller. Just tell your loved ones that, if they’re offended by your behavior.

The lesson I most mercilessly bludgeon my classes with (besides clarity, clarity, clarity) is to write from the heart and project themselves into the characters whose lives they want to chronicle. To open up their. . . veins and bleed into the keyboard and MAKE. ME. FEEL.”–Mark Waid

5.       Feel. You saw this one coming, didn’t you? My mother wrote reams of material and locked it in a file cabinet. When she became ill with Parkinson’s disease, she asked my father to burn it all. I can’t stop wondering what would have happened if she had published it all before she got sick. My mother was a big feeler, but she hid or stuffed her feelings, or projected them onto us kids. She also didn’t seem capable of sharing others’ feelings very well. It may be that she had a life of hard knocks and turned off the emotional faucet. Whatever the case, her work is in ashes now, not libraries.  Instead of stuffing, burning, or getting angry at someone else, empathize next time. You may have very well found your next protagonist. And then share her with the world!

6.       If it’s not selling, try again. My first real writing won awards. I’m blessed to command a real salary with non-fiction. However, I’ve always stayed up late into the night writing fiction. There are a plethora of ever-expanding, accessible ways to publish these days. I tell kids at my Career Day talks that publication isn’t what writing is all about. However, it is part of what writing is all about. I’m going to keep trying to publish my fiction until I can write no more. I hope you do the same!