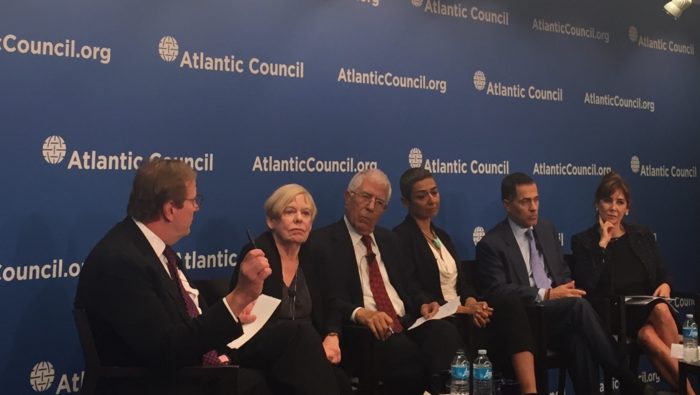 I was honored to witness a conversation about moving beyond  Islamophobia, the first of several of its kind sponsored by the Atlantic Council in Washington, DC, and moderated by its CEO Frederick Kempe. Some of the most renowned experts on Islam sat together and shared their thoughts about how Islamophobia began and how to solve it. One of the major themes of the discussion (which only touched the tip of the iceberg) was open, active, consistent conversation.  Here are the highlights from my notes. You can find the full video here; it’s worth a watch.

Tear Down These Walls

It’s no longer just a matter of foreign policy.

The Parents of Islamophobia

You can find more about me on this blog, on my author website shoresofoursouls.com, or at my coaching site groundonecoaching.com. I’m a journalist, author, speaker, and during my time at the International Red Cross and Red Crescent, I found myself mediating conflicts, large and small, all over the world.

Please join in the conversation. I’ll post my own thoughts on solutions in my next blog, and I hope you’ll share in the discussion by posting below or on social media with #beyondislamophobia. Or you can search out dialogues in your area to become better educated about Islam, like the ones sponsored by the United Methodist Church, which I’ve also attended. Feel free to fact check; it’s your prerogative. I’m in gratitude to these experts all for their courage to share with the world, and to help us all heal.

Posted in Blog, Musings and tagged #beyond islamophobia, shores of our souls