The Virgin Bookstore in Beirut reopened its doors after the 2006 war and again and the 2008 demonstrations that shut them, expanding to three more Beirut shopping districts. Today it’s tweeting about Glow Pens and Whatzzup power banks:

I bought a book I still own at the original Beirut Virgin, which I blogged about.  In my words in 2008:

Writer Rosanne Saad Khalaf uses a quote from Anais Nin at the beginning of  “Living Between Two Worlds,” her study of students who left Beirut in the 1980s and returned in their late teens or twenties: “I could not live in any of the worlds offered to me…I had to create a world of my own…in which I could breathe, reign, and recreate myself when destroyed by living.”

One student describes herself as standing on the perimeter of a circle while everyone else mixes within it, “rarely joining the inner circle, just watching.”  Another  expresses resentment at being repeatedly asked where he was during the war, as though his opinion doesn’t count.  The author describes these returned exiles as living in a state of “extended betweeness,”  “of juggling multiple identities,” of constantly losing and reinventing themselves.

I began my novel first as a non-fiction study of war and global multicultural communication. I thought no other war of our era portrayed the plight of the disenfranchised as much as the Lebanese Civil War, and so I placed my focus there. In time, I realized Lebanon’s story could be much better told in fictional form, because it might resonate more with the heart than the mind… that if I told one person’s story, it might speak more to the macrocosm. That more people might understand.

Although the civil war was supposed to have been long over when I arrived in Beirut, the city still felt surreal to me.  While I was there, a friend called me to tell me there were Israeli bombing incursions just a few kilometers south of Beirut. Ghosts of kidnapped Americans followed me around the AUB campus. People without limbs still begged on street corners, and I wondered if they were part of the 350,000 civil war-wounded. Banks were suspicious of exchanging travelers’ checks with a blonde foreigner on her own.  As I disembarked  on Beirut’s airport tarmac, I thought about the photographs in which it had been just a bombed shell.

And talk about incongruities:  A McDonald’s with valet parking overlooked the famous Corniche that looked down upon the Mediterranean while bullet pock marks still masked what were once beautiful buildings along the city’s Green Line, in spite of every street also hoisting a crane above an emerging new , ever-taller skyscraper. Checkpoints lined the streets that led to some of the world’s most famous archaeological digs. Most hotels had their own personal body guard, and anyone who was anyone hesitated a split second before they disengaged their car alarms to get behind the steering wheel.    And that preceded Lebanon’s last war and the last migration out from Lebanon. 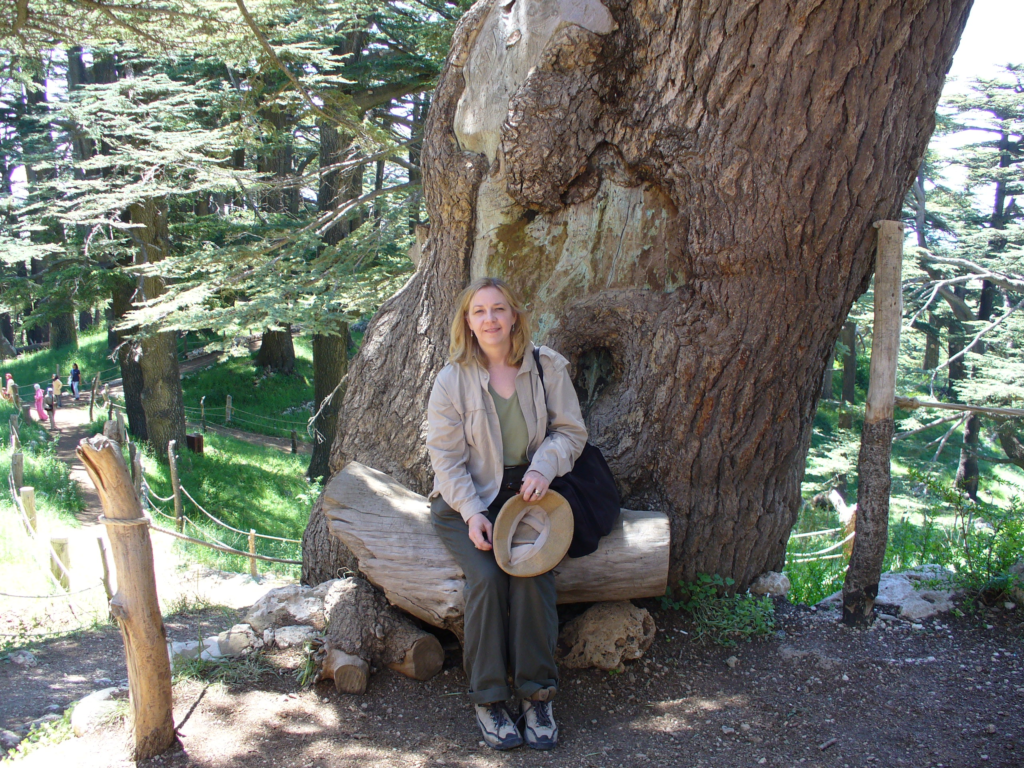 Hard to tell how the people living there feel now.  Maybe that will be a future book, but I hope not.

I hope that my portrayal of one man’s war, and his resulting “extended betweeness”– of alienation, perfectionism, and search for love amid a war within–reflect these times, my times, and in the end, my own world, in which I can “breathe, reign, and recreate myself.” It has been my honor to know each and every Lebanese person my path has crossed, and it is my prayer that their wars will cease, within and without.

Back to present day: Life there–and here–has marched on. Yet it got me thinking about reconstruction in Beirut a decade after the war, a decade after I set foot on its shores to do research for my novel. Here’s what I found out. Not much has changed in spite of all those Virgin bookstores opening, and any future war would create another wave of refugees, in a country housing hundreds of thousands of Syrian refugees. (Lebanon is roughly the size of Connecticut, and has 6 million residents.)

Any future conflict will be far worse for both Israel and Lebanon.

As the 10-year anniversary approached, both Hezbollah and Israel stressed that they do not want another war — even as both declared themselves ready for one.

Hasan Nasrallah warned that Hezbollah rockets could strike ammonia plants at the port in Haifa in any future fight, saying that the damage would be equivalent to an atomic bomb and could lead to the deaths of 800,000 people.

This just in, from today’s English-language Daily Star, in Lebanon:

While the Lebanese are just as enamored with Prince Harry’s girlfriend Meghan, and love a good pet story like Frida the Navy rescue dog, who rescued schoolchildren in the aftermath of Mexico’s most recent earthquake, news on the home front hasn’t changed much. Journalists are still being kidnapped. Interior Minister Nouhad Machnouk has chosen not to accompany President Michel Aoun on his official visit to France in protest of a recent meeting between Lebanon’s foreign minister and his Syrian counterpart. And Hezbollah Secretary-General Sayyed Hasan Nasrallah Saturday made a statement that the resistance must confront Israel in order to prevent occupation and suffering in Lebanon.

I’ve always been in awe of the resilience of the Lebanese people. I repeat my prayer that their wars shall cease. And I’m proud that I could show the beautiful sides of Lebanon and the people who live there in a love story, not in a story of threats, danger, war, and destruction. That, too, may need to come if I write a third novel in the trilogy, so I guess I foresaw it in ’08. However, my current novel reflects the Lebanon I saw as I toured high and low just before the 2006 war–from the shores to the snow-clad mountain tops full of their red-tiled roofs. I hope to get there again someday–this place of normalcy in a world of conflict.

If you’d like to learn more about Lebanon or the Middle Eastern perspective on the Middle East, you can subscribe online to the Daily Star, or search google or amazon for Lebanese authors. Here’s an article about how war shaped Lebanese fiction, so much of it bleak but worthy of their attention and awards for how they’ve captured life in the midst of conflict. Gibran is the exception because he wrote early in the 20th century. Here are my favorite Lebanese books of the 20th century:

Alexandre Najjar, The School of War

Hoda Barakat, The Stone of Laughter