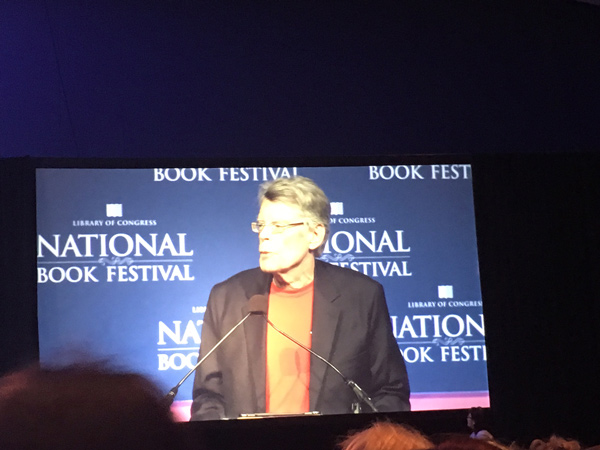 Stephen King spoke to a full house of 2500 last Saturday, September 24 , 2016, at the Washington, DC Convention Center. He was there to accept a literary championship citation for his work and dedication to promote reading, education, and literacy, from the new Head of the Library of Congress, Dr. Carla Hayden.

Author of over 50 books, all of them international bestsellers, King spoke in stories that left us laughing, learning, and continuing to carry the torch to keep public libraries open and reading alive. The day’s events filled with resonating joy and a knowing that the book is far from vanquished.  The festival drew hundreds of thousands of book lovers to hear more than 150 authors speak about “Books As Journeys.”

Stephen King kicked it off–weaving his tales, full of humor, spicy opinion, the occasional f-bomb, and lessons for writers.

Here, I give you access to my notes from the hour we spent together.

King spoke about the first time he ever did a book signing. “Three of them were college friends of mine, the other was a . . . child who wanted Kung Fu books.”

“Nonreaders live but one life. It may not be a great one, or even a good one. But a reader can live thousands.”

John Grisham once told Stephen King, “We’re famous writers in a country that doesn’t read much.”

“Americans don’t argue about books. They argue about TV shows, football scores and whether Tom Brady should have been suspended. The answer, by the way, is no.”

“You know. It’s funny. I foresaw Donald Trump. I published a book called The Dead Zone.”

When his identity is mistaken: “They ask me, ‘Aren’t you Stephen Spielberg?’ I tell them he scared people with a shark, and I scare people with a clown.”

“The one that I always wanted to see was ‘The Children of the Corn Meet Leprechaun.’ That would have been a good crossover.”

“Most of my pets are named for authors, except our current Corgi, who is a thing of evil. The less said about her, the better.”

“Reading is more than a door opener to a better job. It’s cool, it’s a kick, it’s a buzz. It’s plain ole fun.”

“Sometimes, when the right book falls into the right pair of hands, it lights a fire and leads to others.”

“Libraries are not seen as a priority when there are potholes in the road . . . as if learning to think is something that just happens like learning to walk.”

“Jeez, just about everything.”

“I’m up here in front of thousands of people. Did I zip my fly?”

Lord of the Flies

“I have a tendency to move along because there are so many great books.”

“Nancy Drew and the Hardy Boys were full of shit.”

King ‘s newest novel, Sleeping Beauties, which he co-authored with his son Owen, will be published next year.  It’s no surprise that all of his kids are readers, and you guessed it, writers. You can see his full, live streamed speech, including his comments about turning 70 at The Library of Congress Facebook page.

I’ll be posting more comments about the people I met at and the authors I learned from at the festival over the next few weeks. Come back and see what they said.