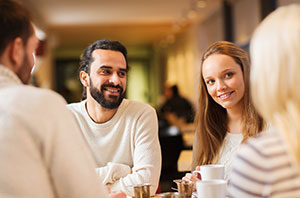 When I began writing The Shores of Our Souls, I knew my choice of point of view was critical. Point of view can make or break a story of interplay between cultures.

I started the novel in my protagonist Dianna’s point of view. I’d always been fascinated by Scout’s point of view in Harper Lee’s To Kill A Mockingbird – the voice of a little girl observing a world full of racism juxtaposed with her wiser, older self. I also grew up Southern, with my parents and ancestors from South Carolina, and me spending much of my young life in Virginia – surrounded by the cadence of Southern voices. At Hollins University, I learned to write what I knew, and I knew the Southern voice.  Shores began as Dianna’s story, her journey toward self-discovery and empowerment. Dianna of course is in her 20s, but is young and sheltered enough that her observations are still driven by curiosity, not judgment.

Yet Dianna meets Qasim in my novel’s second chapter, and he becomes instrumental in developing her world view, which until now, has been melded by a challenging yet insular home life.  I’d decided he was from Lebanon, a place I knew more about than the average American due to my career, travel, and friends. During first revisions, I decided to get to know him and his birthplace better.

As I crafted Qasim’s back story, I became immersed in a life so different than my own, and yet so similar. I had begun Shores to show how much cultures have in common, and my research and writing affirmed that belief.  Both Qasim and Dianna are damaged at first. They both experienced manipulation and trauma from the hands of loving parents.  Full of intellect, adventure, and passion, they are both held back, almost trapped as victims, by responsibility, world politics, and societal shaming.

Qasim’s story intrigued my readers, too. I decided to complete my novel in more than one point of view. Readers needed to connect with Qasim more than Dianna herself does, because Dianna alternately trusts and distrusts him, feelings common to a woman treading new love in any culture. The reader needed to know that Dianna wasn’t an entirely reliable narrator. I decided to write Dianna in third person point of view and Qasim in first person.

Just as an actor needs to “inhabit” a character, an author must walk a mile in a character’s shoes as she writes. I didn’t want flat, tidy characters; I needed to take risks with my protagonists’ flaws. Dianna, though she’s not a gold digger, does fall for Qasim for his outward persona – his age, prestige, and worldliness. Yet as she comes to know him, she begins to love him for who he is and not what he offers.  Qasim’s reserve, she learns, is a cultural dynamic, just as her own Southern roots molded her. Their love of family and country causes them both to be alternately judgmental, secretive, and selfish.

Writing Qasim brought me great joy. I’ve always loved the rhythm, music, and inflection of languages. Arabic, and the way Arabs speak English, fascinates me. Qasim’s dialogue made his character rich with detail and emotion.  I “found” Qasim’s voice in first person. In third person, his character fell flat and dull. Conversely, one way I made certain I wasn’t putting too much of my own youthful self into Dianna was through the distance of the third person.

My journey writing about Qasim and his culture, through his point of view, has only made me respect the people of the Middle East more. They are brave, strong, and gifted in business and the arts. If you like my novel, I urge you to read Middle Eastern and Arab American authors. They have a rich collection of books in English.

I was surprised when readers suggested I start my first chapter in Qasim’s point of view, but I’m glad I did. Shores remains Dianna’s story, but Qasim drives her story forward.  I hope my readers love both characters in all their human frailty, or at least understand what moves them a little better than they did before opening my novel. It’s these moments of connection and comprehension that save our souls—and our world.

If you’d like to be notified when The Shores of Our Souls is ready to purchase this summer, go to Kathryn’s author site shoresofoursouls.com and click to read the first chapter now. If you’d like to continue the discussion of multicultural relationships, catch her upcoming series on http://yourtango.com/experts/kathrynbrownramsperger.

This guest blog originally appeared on TouchPoint Press’ blog. TouchPoint will publish The Shores Of Our Souls in Summer 2017.