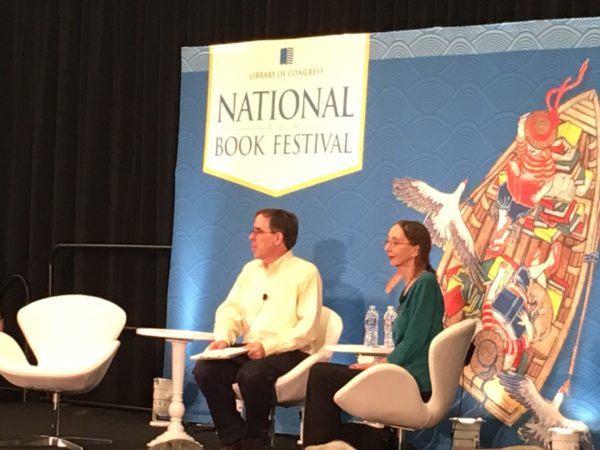 Joyce Carol Oates, In Her Own Words

Joyce Carol Oates published her first book in 1963 and has since published over 40 novels, as well as plays, novellas, critical reviews, and volume after volume of short stories and poetry. I was lucky enough to have a great seat to hear her interviews with The Washington Post last month.

Oates is plucky and profound all at once; she dives deep. She’s a curious philosopher, a contemplative who weaves stories like tapestries. I discovered her second husband is a neuroscientist (her first husband passed in 2008), and that she has Hungarian heritage. She fell in love with books through Alice in Wonderland and wrote her first book at 15.

Here are the highlights from the notes I took.

On The Blank Page:

“I always have a title, the beginning, and the ending. The trouble’s the middle.”

On How Much of Her Writing Comes From Her Life:

“You can’t write with emotion unless you’re galvanized by experience.”

“Sometimes women write later in life. The latency of what women have to say will come out later when they’re not so distracted by the demands of everyday life.”

“Thrilling writing comes from the heart. It dramatizes our human condition.”

“It’s about selecting and enhancing a voice that has a music of its own.”

“We [novelists] must populate a world with characters based on what’s plausible.”

“I use Hemingway for structure. He was Master of Structure.”

On The Gothic Novel:

“Gothic sensibility is almost entirely a writing sensibility. It’s the most traditional of all forms, respectful of its predecessors.”

“The vampire was just a way of talking about politics, the lord of the castle. The werewolf is a symbol of the Jungian shadow or the Freudian id.”

“Astonishing after living through the 1960s, and the birth of an idea [civil rights], it’s dispiriting we’re still working this out.”

“People might not understand the degree to which scientists are extraordinarily imaginative in creating experiments.”

On the Writing Career:

“The writing life is one thing, and the career is different.

I’m not trying to accomplish anything in a large cosmic sense. It’s that each story demands to be told.”

On the Publishing Scene:

“Audio books are on the rise.”

On The Art of Writing:

“Most artists are transgressive.”

Advice to Other Writers:

“Nobody who’s a cat person gets a swollen head.”

From her new book of essays Soul at the White Heat:

[blockquote border_color=”#00a9e0″ bg_color=”#f2f2f2″ effect=”none”]“On San Francisco Bay sunlight glittered in dazzling ripples in slate-blue water. In the distance was the great city like a vision or a mirage you might hallucinate from within the wall of San Quentin, improbably beautiful.” [/blockquote]

From Joyce Carol Oates’ newest novel, The Man Without A Shadow:

She falls in love.

She falls in love.

At last she says good-bye to him 31 years after they first met on his deathbed.

He has forgotten her.

Final Question: What do you say to a legend?

I told her how much I admired her work, but that I was sure I’d missed something because she is so prolific.

Her answer as she signed my book:

My mother, a teacher, is smiling down upon me from the heavens right now, that Joyce Carol Oates thought I was a teacher, who by the way self-identifies as a teacher.

She’s still asking questions all these years later, and that, my friend, is what I think makes a great writer.